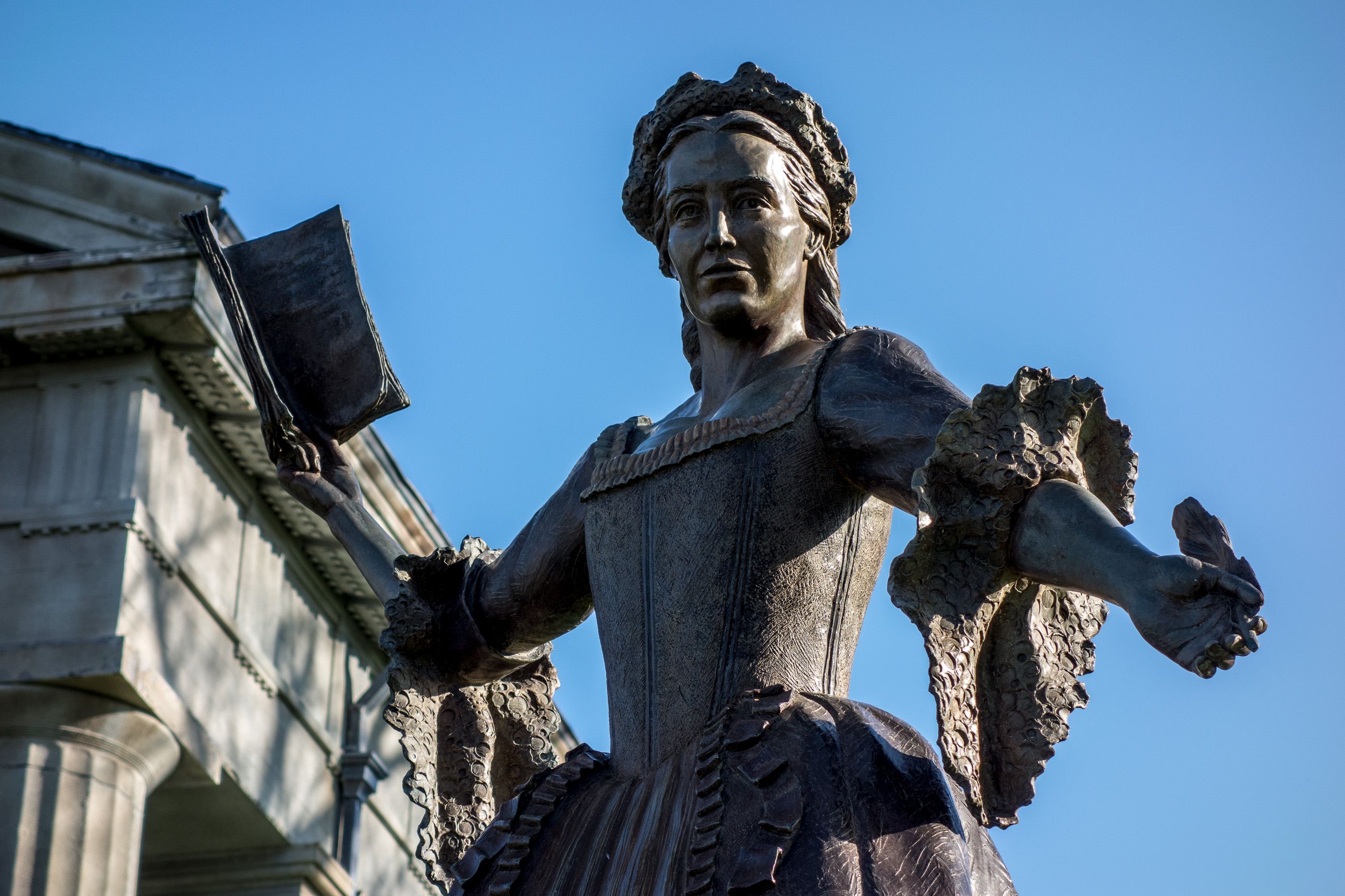 “The rights of the individual should be the primary object of all governments.”

So said Mercy Otis Warren, a liberty activist, hundreds of years ago and so say we today. The Freedom movement is not a boy’s club. It might sometimes look like one, but reason tells us that it certainly is not, nor has it ever been. Behind the scenes, countless women have grasped the hand of Liberty and put their efforts to her aid. Some of them step forth and stand out, some do not, but we are here, and have been here from the beginning.

In the past, women were not always afforded the same respect and voice that we are beginning to enjoy. It is heartening that the Freedom movement of today has made for itself a mission to recognize the validity and necessity of the contributions of women. It was not always so that women were openly respected in this manner, but even in the past, some women have stepped over the restrictive margins imposed by the collective ignorance and recognized their own capacity for brilliance. We have always been here, and always there have been open minded men who encouraged and accepted our emergence.

Mercy Otis Warren was one of those who emerged long before it was accepted by a majority. She inspired not only those in her immediate circle, but an entire movement, and her example and foresight continues to inspire us today. Warren was a woman who recognized the folly of centralized federal power from the inception of our Constitution, and who used her talents to warn our founders that a move away from localization would be detrimental to the liberty of the people. Perhaps if they had listened, we would not have the gigantic federal monstrosity of today. Fortunately, her vision is supported by many in the modern Freedom movement, among them, Adam Kokesh, who is advocating the abolition of this tyrannical system.

Often called “The Conscience of the American Revolution,” and given recognition for the brilliance of her pen and the genius of her mind, Mercy Otis Warren’s life was not an easy one, regardless of the advantages given to her by Providence. From an early age, her intelligence was recognized, and her brother James Otis Jr. advocating the potential of his sister’s intellect, persuaded their father to afford her the sort of education he himself enjoyed. While most women were only instructed in dancing, decorum and household duties, Mercy was offered a foundation in classical studies, where she learned to love reading and writing. Although instructed at home, and not allowed to continue onto college, this early advantage set Mercy on a unique path in a time period when matters of philosophy were thought to be exclusively the territory of the masculine sex.

Mercy’s family life also nurtured a revolutionary spirit within her. She came from a prominent family of attorneys. Her brothers were involved in local politics and among those who protested British abuses towards the colonial citizens. Mercy’s brother James, a lifelong ally and especially close companion, was very active in the freedom movement. It was he who introduced Mercy to her soon to be husband James Warren, yet another revolutionary.

While her love of literature and learning brought richness to Mercy’s life, she was equally passionate about her home and her family. She adored her husband and the couple enjoyed a very happy and mutually dedicated partnership. Mercy and James had five children, all boys, and motherhood brought with it a new and rewarding facet which she dearly loved. Mercy Warren was very content in this setting, and from all accounts never asked for more.

As problems with government abuse mounted, her world expanded to encompass further considerations. When Mercy’s beloved brother, James Otis was beaten by soldiers, he never fully recovered. Although his physical health improved, he developed mental illness that crippled his capacity to share the ideas he’d earlier so eloquently brought to his peers. This caused great sadness for his sister, and it may have been this incident that planted the seed within her that perhaps she might attempt to share her thoughts.

Mercy’s husband James Warren’s involvement in politics brought many likeminded revolutionaries into the Warren’s home, which had, by this time, become a hub of conversation and meeting where colonial rebellion was instigated and discussed around the hearth. Mercy was supportive of the freedom movement, but her genius tended to express itself in writing. As she listened to the conversations, she began to write about her ideas. Her husband teased her, affectionately calling her a “scribbler”, but he encouraged of her expression and persuaded her to share her thoughts with visitors. The Warrens were friends with many people, notably John and Abigail Adams, George and Martha Washington, Thomas Jefferson, and Hannah Winthrop.

Soon, Mercy was writing plays and satire about the abuses of the British political authorities. As she began to share, her friends, especially John Adams persuaded her that the writings should be published. She chose to publish under pseudonyms, perhaps because at the time, women were not extended the same respect as men when it came to voicing opinions. That being said, this was not the notion of all men, for it was by the encouragement of men without such stringent prejudices that Warren’s voice found the courage to propel itself forward.

“We will stand against tyranny today or our children will bow tomorrow.” These are the words of Mercy Warren, a mother who didn’t seek conflict, yet recognized the import of standing against the mounting abuses of freedom. As the war advanced, she became active alongside other women who, in defense, began making their own homespun items, and boycotting, so as not to line the pockets of the empire. She used her pen to address not only men, but other women calling for them to give up the vanity of using certain products in order to bolster the revolutionary effort.

Clearly, Warren was a strong, brilliant and courageous woman. In her time, she crossed many barriers in relation to the societal prejudices towards members of her sex. Alongside the gifts she enjoyed, she also faced challenges such as depression and illness. Hardship was an unfortunate feature of war, and Mercy did not shy away from these challenges, but her willingness to sacrifice had its limits, and again, she defied the norm.

Women were told they needed to stop being selfish for the good of the revolution and this meant being left alone for long periods while the males were off fighting or spending their time away from home in a political capacity. Mercy was not as willing to agree to this. When her husband was away, she wrote asking him to come home, and more than once persuaded him to decline the political and military posts he was offered. Her 54 year partnership with her husband was of great value to her, and her husband was also quite devoted. Friends of the family, such as John and Abigail Adams criticized the Warrens for their selfishness, but they stood firm.

From her relationship with her brother, to her husband, children and friends, Mercy Otis Warren demonstrated a great capacity for appreciation and recognition of the value of the relationships with those she cared for. She once noted, “The balm of life, a kind and faithful friend.” During the war, her pen inspired and encouraged many, not only intellectually, but in the capacity of comfort and condolence during hard times. Even in those times when she, herself struggled, she expressed determination. “The waves have rolled upon me, the billows are repeatedly broken over me, yet I am not sunk down.”

Although she developed blindness late in life, she continued to dictate her thoughts for publication. After the war she wrote the first history of the American Revolution. She again stressed the importance of human freedom from despotism.

“There is a certain supineness which generally overspreads the multitude, and disposes mankind to submit quietly to any form of government, rather than to be at the expense and hazard of resistance. They become attached to ancient modes by habits of obedience, though the reins of authority are sometimes held by the most rigorous hand. Thus we have seen in all ages the many become the slaves of the few; preferring the wretched tranquility of inglorious ease, they patiently yield to despotic masters, until awakened by multiplied wrongs to the feelings of human nature; which when once aroused to a consciousness of the native freedom and equal rights of man, ever revolts at the idea of servitude.”

When the new government began to debate turning away from the Articles of Confederation and moving towards a system of stronger central authority, she wrote prolifically in protest of the trend towards centralized federal government. Hers was also a leading voice in identifying the need for a Bill of Rights. She spoke out against slavery and she decried the machinations of aristocracy moving against individuals, trying to take them back into servitude.

Women have always played important roles in the Freedom movement, they have often been nameless unto history, but we know they were there. In the case of Mercy Otis Warren, the special circumstances of her life made inroads into a realm which had hidden away the contributions of women. Her contributions brought into the light the brilliance a woman of great heart who knew her mind, and wrote about the reflections of her time.

Men and Women of the Freedom movement today are reevaluating the discoveries that were evident to Mercy Otis Warren and many before her. Individual rights matter. A vast power cannot represent the individual effectively, nor can they represent the diversity of regions, populations and communities. The closer the people are to the decisions that affect their communities, the better they serve the interests of the people. As Otis said, “No republic ever yet stood on a stable foundation without satisfying the common people.”

This is one of the reasons why a strategy like localization can be a hopeful alternative to federal central government. When various localities decide for themselves, it promotes both liberty and innovation. As Adam Kokesh has described, “It’s the everyone gets what they want strategy. We don’t have to be united under one government to be united in American values!”

I hope this article has been informative and inspiring. As a woman, I have often wondered what others before me did, and what they were like. It has been rewarding to read about Mercy Otis and I encourage others to read her writings. It seems fitting to end this article with an excerpt from her 1788 pamphlet, “Observations on the New Constitution, written in protest of the move back towards overarching government and away from freedom.

“All writers on government agree, and the feelings of the human mind witness the truth of these political axioms, that man is born free and possessed of certain unalienable rights— that government is instituted for the protection, safety and happiness of the people, and not for the profit, honour, or private interest of any man, family, or class of men — That the origin of all power is in the people, and that they have an incontestable right to check the creatures of their own creation, vested with certain powers to guard the life, liberty and property of the community: And if certain selected bodies of men, deputed on these principles, determine contrary to the wishes and expectations of their constituents, the people have an undoubted right to reject their decisions.”