One of the most important issues facing the Freedom Movement today is the issue of government sponsored murder. This murder might target a government’s own people through many different tactics, or it can refer to killing the people of other countries through the destructive force known as war. Some of our heroes throughout history have been thrown into this madness by necessity. People like George Washington, or any number of freedom fighters across time and regardless of country, have had to take up arms to defend liberty. This is not always the best or the bravest way. Sometimes, it takes more courage to not pick up a weapon.

It is shocking to me that the concept of being a voice of peace is out of the mainstream. Or is it? The media as a whole, with this issue, just like any other, want you to swell with nationalistic pride as we murder men, women and children. We, as a people, are not buying the propaganda. I like to write about those long ago heroes who took a stand. Finding a freedom fighter that has been hidden from us makes my heart race and feel accomplished when I share their story. Again, the historians lie in varied ways. Sometimes, they hide our brave men and women through a more subtle deceit. They distract you and hide the truth so that you only focus on one act of valiant action and cover up the more important facets that do not further the government approved narrative. As part of this series, I am not only going to share those who have been erased, but also those who have had their lives corrupted at the end of a propagandist’s pen. We don’t have to look too far in history to find one of these individuals that stood for peace. 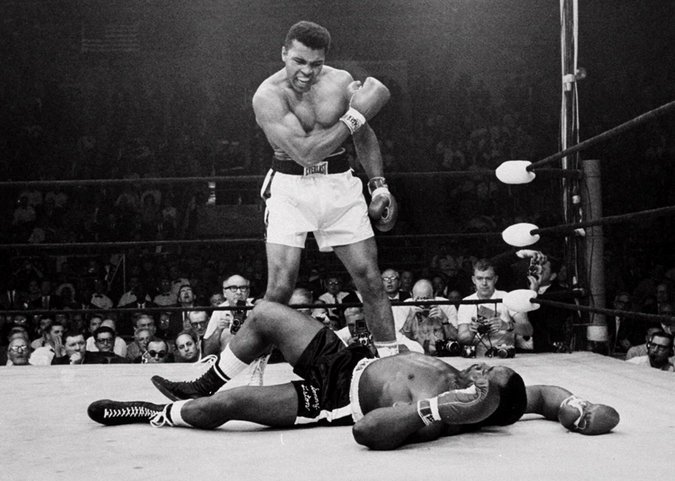 In the middle of the war in Vietnam in 1966, the draft status of the iconic boxer Muhammad Ali was changed, and he, like so many other people at this tragic point in our history was told by our government that he was going to pack up his life and go kill people who had never harmed or threatened him. He answered them with this “My conscience won’t let me go shoot my brother, or some darker people, or some poor hungry people in the mud for big powerful America.” In an act of defiance, he continued, “And shoot them for what? They never called me nigger, they never lynched me, they didn’t put no dogs on me, they didn’t rob me of my nationality, rape and kill my mother and father. … Shoot them for what? How can I shoot them poor people? Just take me to jail.” That’s right, he knew the consequences of standing against our empire; the loss of his own freedom. He, as one of the most famous sports figures in history, said I will not murder for this government.

When, a year later, he was forced to attend his induction into the military, they called out his name and he stood firm. Repeatedly, they announced his name, and over and over, he did not step forward. Imagine the pure will that it must have taken to not submit. To be clear of what he was facing, the punishment for this felony offence was a $10,000 fine and 5 years in prison. Still, his convictions and nonviolent beliefs held him in place.

This punishment was nothing compared to the repercussions of losing his career. He instantly became a hated face of a peace movement that was on the rise. The government and their media lackeys fumed that he would have the gumption to stand up to them. Secretly, they feared this action. He had shocked the world when he converted to Islam and changed his name from Cassius Clay to Muhammad Ali. How could this Muslim Black man stand up to the power of the United States? If someone like Muhammad Ali did not submit to them, he might inspire others. The war was being waged disproportionately by poor men of African descent. These were exactly the people that Ali would inspire to say NO. In the minds of those people in Washington DC, he had to be forced to change his position. The best method they felt to achieve this was by smearing his reputation.

David Susskind, a television host, is a perfect example of this.

He said “I find nothing amusing or interesting or tolerable about this man. He’s a disgrace to his country, his race, and what he laughingly describes as his profession. He is a convicted felon in the United States. He has been found guilty. He is out on bail. He will inevitably go to prison, as well he should. He is a simplistic fool and a pawn.”

If you take this apart, it is easy to see the messaging taking place. Boxing is a form of entertainment, so they needed to remove the “amusing” part of the equation. To those who enjoyed boxing, saying that Ali was a “disgrace” and adding that he “laughingly describes” his position as a popular sports star was supposed to illicit a response of dislike from sports fans. The messaging also tears down Ali to both those blacks that might follow him and at the same time paints him as a traitor to his country. Susskind goes on to call him a felon in an attempt to make “law abiding citizens” turn against him. The felony that Susskind neglected to describe was the act of refusing to bow to this tyrannical practice of the draft. It is no more, again, than propaganda.

It did not stop there. Being torn down by white men in power would not be enough to subjugate the black populace. This was the 1960’s, and the power of the black freedom movement was strong. Martin Luther King Jr., Malcom X, and Rosa Parks were not memories from years ago. These well known freedom fighters were either still alive, or in the case of Malcom X, recently killed. The government needed to tear Ali down in his own community.

In steps Jackie Robinson, another popular sports star. Robinson was a baseball legend. He became a tool of the media to drum up support for the war effort among the African American community. He said this of Muhammad Ali, “He’s hurting, I think, the morale of a lot of young Negro soldiers over in Vietnam.” Again, he was trying to turn black mothers and fathers whose sons were in Vietnam against Ali. Robinson went on to say, “And the tragedy to me is, Cassius has made millions of dollars off of the American public, and now he’s not willing to show his appreciation to a country that’s giving him, in my view, a fantastic opportunity.” He was saying in this comment that Muhammad Ali owed it to the government because they allowed him to make money on his talents. It is a disgusting comment to say that the act of murdering people in another country is “a fantastic opportunity.”

Ali would not back down. His response to all of this pressure and persecution was this: “I would like to say to those of the press and those of the people who think that I lost so much by not taking this step, I would like to say that I did not lose a thing up until this very moment, I haven’t lost one thing.” He saw, as many of us see, that we are presented with choices and no amount of coercion can make something like war that is wrong, right. Muhammad Ali knew that the government does not own him and could not make him murder on their command. He was FREE. He continued with this, “I have gained a lot. Number one, I have gained a peace of mind. I have gained a peace of heart.” Like people throughout history who have stood against the wrongs of the world, he knew he had made the right decision.

Eventually, after three years, under pressure from the growing anti-war movement, he was allowed to return to boxing. It will never be known how much his stand against war fueled this movement, but it is my belief that it was an important factor. The American people saw someone take a stand for them. This was not about Muhammad Ali not wanting to fight. His entire life was about that. What it was about is two questions. The first is an easy one to answer. Is war wrong? The second should be easy, but often isn’t. Do you own yourself or does the government hold dominion over your life? To these questions Ali answered clearly. He said killing another human being in the service of any government is wrong and that he owned himself and made his own choices.

Those of us in the Freedom Movement can learn a lot from Muhammad Ali. He should inspire us. This inspiration should go far beyond our efforts to end war. Each of us should say as individuals, and shout at those who push unjust and unethical behavior, that we will not be pushed into submission. We, peacefully, like Ali, should hold our heads high and stand with grace and love. At the end of the day, there are those who will say that we are cowards. We know better. It is the coward’s way to do what you are told. It is the way to the next step in human evolution to practice peace, love, and freedom.

This is likely my favorite quote by Muhammad Ali. It captures what I said about Adam Kokesh in my Article “Edgy Adam Kokesh.” It shows why we need more people with edge and guts. Why we should be proud, like Ali was, of who we are. Muhammad Ali will be missed by the world, he died June 3rd 2016, but his legacy lives on.