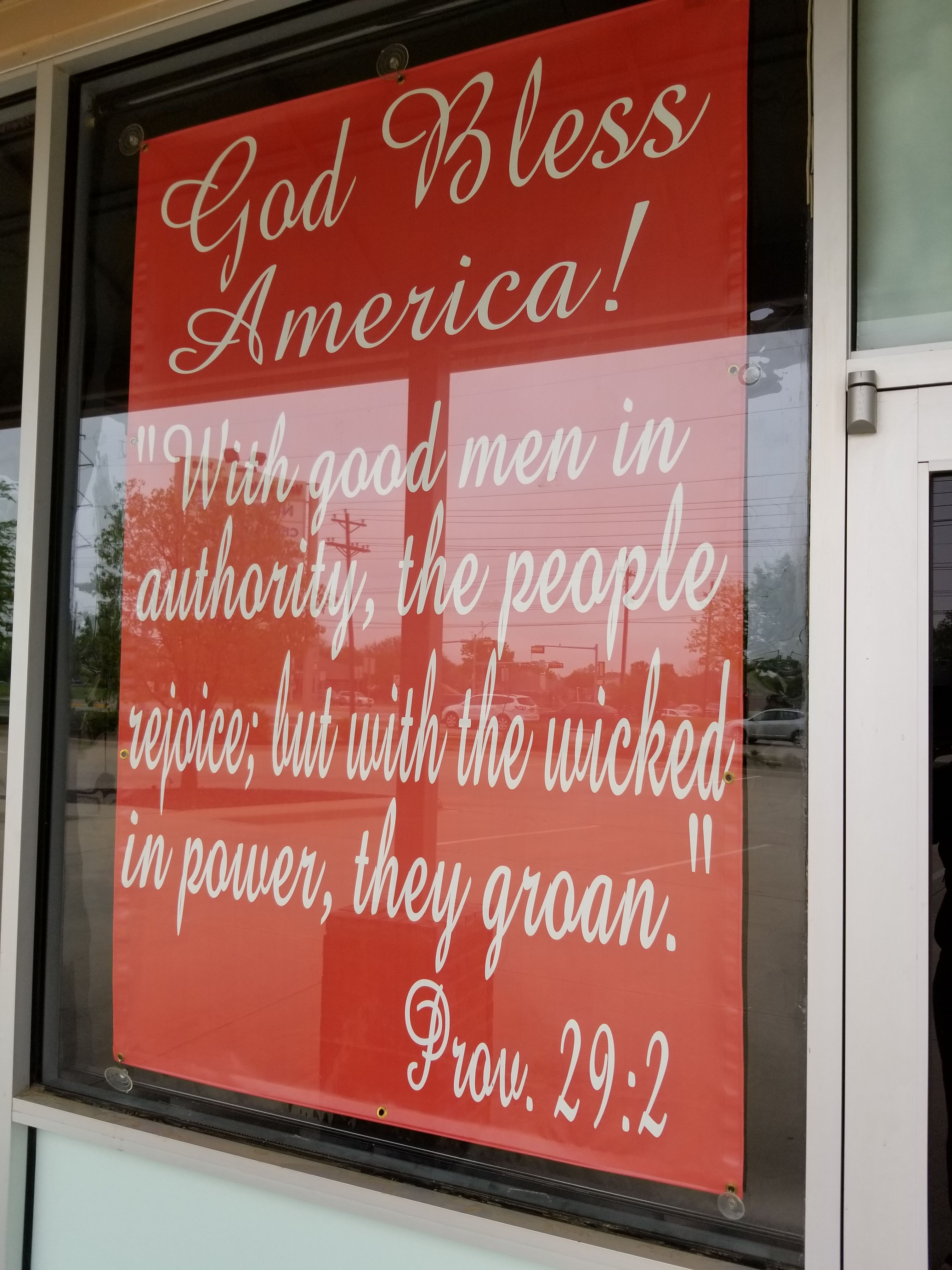 I’ve heard from many Christians that Jesus was a libertarian. As a Jewish pantheist myself, I suppose that the benefit of all religions which preach any kind of morality is that they give us a spiritual reason to be better people and help make society more ethical. The only time that Jesus used violence in the Bible was when he turned over the tables of the money changers in the temple. He consistently preached peace and nonviolence, so it would be hard to conclude that he was anything but a libertarian.

In Dallas today, I was at a strip mall with a church in it. It had a sign in the window that read, “God Bless America! ‘With good men in authority, the people rejoice; but with the wicked in power, they groan.’ Prov. 29:2.” To me, the message couldn’t be more clear: If we want a good Christian country, we have to get rid of all coercive government.

Putting the sexism of this verse aside, and understanding that when I say government, I am using the term in only its common use to refer to a territorial monopoly on violence funded by theft, it is clear that every good Christian must also be a libertarian. This is not just an interpretation, but an ethical imperative since libertarianism is the only political philosophy based on the ethical standard of the non-aggression principle, and thus the only one in line with Christian ethics.

As a man of peace myself, I am not calling on Christians to pick up the sword against government, but rather to turn the other cheek, and render unto Caesar what is Caesar’s. That famous Bible quote from Jesus was in response to the question about whether or not to pay taxes. “Render unto Caesar the things that are Caesar’s, and unto God the things that are God’s.” Let Caesar have his money with his face on it. If you want to serve God, do not use it, and do not pay taxes.

“No man can serve two masters: for either he will hate the one, and love the other; or else he will hold to the one, and despise the other. Ye cannot serve God and mammon.” Matthew 6:24. To serve government in any way is an afront to God. Government makes us all wicked when we play along even in the slightest because to give in to the immorality of government is to say that God’s law has exceptions. “Thou shalt not steal, unless you’re an IRS agent.” “Thou shalt not kill unless a military general orders you to.” “Thou shalt not bear false witness unless you’re a politician.” To say that you can make exceptions to God’s law for government is to say that God’s law is no law at all, or to acknowledge that government is the work of the devil and a good Christian should have nothing to do with it.

Of course I’m not a Christian, so far be it for me to tell someone how their religion tells them how to live. But I cannot hold my tongue in light of the massive hypocrisy by church leaders in America who support coercive governments and “lead their flocks astray.”

First Samuel Chapter 8 makes God’s views on government very clear: All the elders of Israel assembled and went to Samuel at Ramah and said to him, “Now that you are old, and your sons do not follow your example, appoint a king over us, like all the nations, to rule us.” Samuel was displeased when they said, “Give us a king to rule us.” But he prayed to the LORD. The LORD said: Listen to whatever the people say. You are not the one they are rejecting. They are rejecting me as their king. They are acting toward you just as they have acted from the day I brought them up from Egypt to this very day, deserting me to serve other gods. Now listen to them; but at the same time, give them a solemn warning and inform them of the rights of the king who will rule them. Samuel delivered the message of the LORD in full to those who were asking him for a king. He told them: “The governance of the king who will rule you will be as follows: He will take your sons and assign them to his chariots and horses, and they will run before his chariot. He will appoint from among them his commanders of thousands and of hundreds. He will make them do his plowing and harvesting and produce his weapons of war and chariotry. He will use your daughters as perfumers, cooks, and bakers. He will take your best fields, vineyards, and olive groves, and give them to his servants. He will tithe your crops and grape harvests to give to his officials and his servants. He will take your male and female slaves, as well as your best oxen and donkeys, and use them to do his work. He will also tithe your flocks. As for you, you will become his slaves. On that day you will cry out because of the king whom you have chosen, but the LORD will not answer you on that day.”

If you serve today’s government, will the Lord answer your prayers? Clearly not. “Good men” do not seek authority through the violence and coercion of government. Many of us who “wake up” to libertarianism end up rejecting religion as well, but to make a better world, we must be called to a higher standard of ethics, not a higher standard of theological alignment. I’m sick of seeing secular libertarians bash Christians and Christianity. Personally, I don’t care what your faith is so long as you live ethically. So to all the Christians who might read this, turn the other cheek and do not seek to use the violence of government to control others. Let Caesar have his money and let’s do our best to be tax resistors by using barter and Bitcoin. Let us all live up to the standard of Christ, to the standard of God, to the standard of ethics and do everything we can to banish the wickedness of government from Earth once and for all.